Caffeine is the most widely consumed psychoactive substance on the planet, and it forms the backbone for many of the best pre workouts on the market, including our very own Mega Pre Red.


Despite the ubiquity of caffeine, many consumers of the powerful compound don’t fully understand how it works, other than the boost in energy it gives.


Today, we’re taking a deep dive into all things caffeine -- what it is, what it does, and how it can help individuals perform better mentally and physically.


Let’s start at the top! 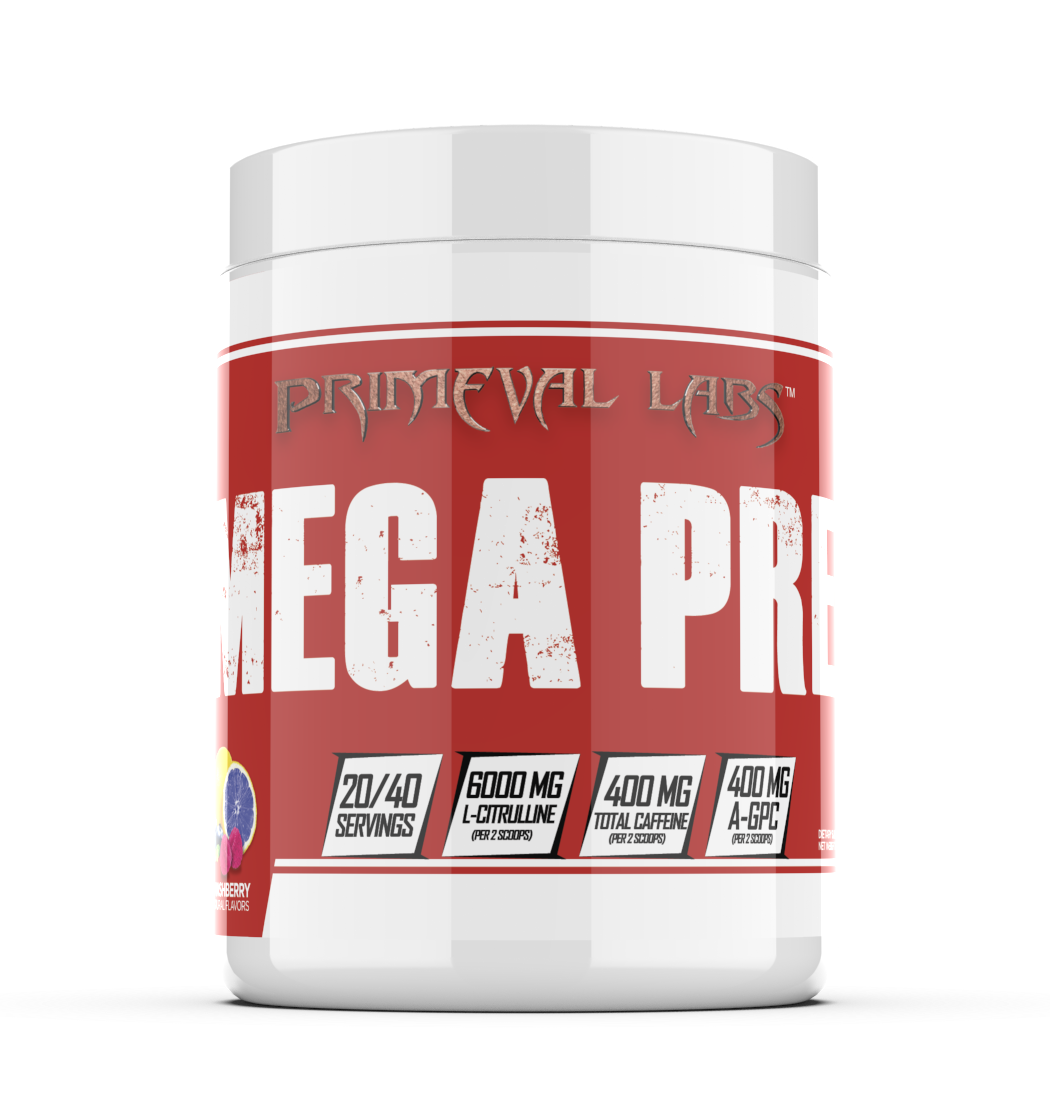 Caffeine (1,3,7-trimethylxanthine) belongs to a group of compounds called methylxanthines, which are found in a number of foods common to the diet, including coffee, tea, and cocoa.[1]


It’s estimated that around 85% of the adult U.S. population consumes caffeine each day with daily intake averaging around 2.4 mg/kg/day (which is roughly 196mg caffeine for a 180 pound individual).[1,2,3]

How Does Caffeine Work?

Caffeine does a many splendid things in the body. By understanding these mechanisms, we can begin to see how and why caffeine can benefit mental and physical performance.


Well, adenosine is a neurotransmitter that promotes feelings of tiredness and lethargy. By antagonizing the adenosine receptor, caffeine increases wakefulness and alertness.


In regards to exercise performance, blockade of adenosine receptors also leads to[4]:


Together, this helps improve an athlete’s ability to generate force and maintain power output during intense exercise, thereby enhancing resistance to fatigue across a wide spectrum of athletic endeavors, including everything to resistance-training to sprinting to endurance exercise.[5]


By inhibiting the actions of PDE, the effects of cAMP are prolonged, which has several important downstream effects in the body.


If these two chemicals sound familiar, they should. Together, epinephrine and norepinephrine spark the "fight or flight" response during stressful situations.


Another by-product of these increased catecholamines is increased cardiac output (i.e. the rate and force of heart contractions increases), which helps deliver more oxygen to the brain and other tissues, like skeletal muscles.


And, in case you were wondering, PDE enzymes are the same family of enzymes that are the target of blood flow enhancing compounds, such as Viagra and Cialis.


When muscles receive the signal from the CNS to contract, a structure found within muscle cells called the sarcoplasmic reticulum releases calcium ions.[6] The ions subsequently initiate muscle contraction, which is sustained by ATP.


This is noteworthy as reduced calcium release from the sarcoplasmic reticulum leads to a reduction in force production. Therefore, supplementing with caffeine (in the form of a pre workout) could help improve force generation during exercise.


In case you didn’t know, GABA is one of the primary inhibitory (“downer”) neurotransmitters in the body.


By preventing GABA from binding to its receptor, caffeine promotes arousal and excitement. It’s important to note that the GABA-antagonizing properties of caffeine do not see to be as prominent as its effects on adenosine receptors.

This might strike you as odd, on account of many individuals out there saying that caffeine constricts blood flow, and thereby impairs muscle pumps and muscle building.


However, that’s a bit too reductionist in regards to caffeine’s effects in the body.


You see, caffeine has different effects on different tissues in the body.


For instance, caffeine can constrict blood vessels in the brain, which is why caffeine is included on one of the ingredients in many over-the-counter migraine products.


And, as we said above caffeine also serves as an adenosine antagonist. Adenosine has different roles in the body depending on the tissues it’s impacting.


For instance, in the CNS adenosine induces fatigue. In the vasculature, adenosine exerts vasodilatory effects, meaning it can cause blood vessels to dilate and facilitate greater blood flow.


Now, here’s where things get interesting.


Blood vessels are composed of several different types of cells.


The outer layer is made up largely of connective tissue, which helps the blood vessels stick to tissues in the body.


The middle layer of cells consists of smooth muscle cells, which regulate how open or closed (vasodilation or vasoconstriction, respectively) a blood vessel becomes. This means that smooth muscle cells can have a direct impact on blood flow -- remember this point, it’s important!


The innermost layer of vessels is comprised of a single layer of endothelial cells along with various “supporting” cells.


Endothelial tissue is both structural and functional as it serves as the outer layer of arterial walls and selectively allows compounds to pass through it, similar to how the blood-brain barrier only allows certain compounds to enter the brain.


Caffeine is able to act directly on endothelial cells where it stimulates the production of nitric oxide.


Caffeine accomplishes this feat by first stimulating the release of calcium ions from the endoplasmic reticulum, thereby leading to an increased intracellular calcium concentration in the cytoplasm.


This release of calcium ions leads to the formation of a complex with calmodulin (a calcium-binding messenger in our cells) which encourages the activation of endothelial nitric oxide synthase (eNOS), resulting in nitric oxide production.


But, that’s not where the story ends.


The initial action of caffeine on smooth muscle cells results in vasoconstriction, and it’s due to this transient vasoconstriction that many people will point to the fact that caffeine hinders blood flow and thereby, muscle pumps.


However, this vasoconstriction is brief, and research affirms that caffeine promotes a “significant vasodilator effect”.[1] This happens through a few different mechanisms, which are a bit complex and require a separate article all their own to explain.


The important takeaway here is that caffeine does not adversely impact blood flow long term, and isn’t going to inhibit muscle pumps. If anything, it supports them.


And, when you read the research on pre workout supplements (all of which contain caffeine), they note significant increases in blood flow.[9]


Now, most pre-workouts include supplements to promote greater blood flow (such as L-Citrulline), but the findings do not suggest that any potential vasoconstrictive action brought on by caffeine is significant enough (or long lasting enough) to have a meaningful impact on performance or blood flow.

How Does Caffeine Boost Performance?

Given the vast array of effects, caffeine has on the body, it’s easy to see that it would impact mental and physical performance in a number of ways.


First, and most obvious, is that caffeine stimulates you, meaning it increases energy and motivation, helping you to get things done with greater efficiency and enthusiasm.


Third, caffeine enhances an individual’s resistance to fatigue, particularly when participating in high-intensity exercise modalities such as sprinting or cycling.[11]


Fifth, caffeine may increase the number of reps you can perform before succumbing to fatigue and failure.[12]


Finally, there’s even some research suggesting that supplementation with caffeine can boost strength, power output, and muscular endurance[13,14,15,16]

Beyond its performance-boosting effects on the field or in the gym, caffeine may also help you perform better at work or in the classroom.


The reason for this is that a number of studies have shown that caffeine can improve[19,20,21]:

Caffeine isn’t only effective for those looking to perform better and/or build muscle. It’s also shown to be one of the few supplements that actually helps individuals lose weight.


Studies using both lean and obese subjects has found that consuming as little as 100mg of caffeine (the same amount in a cup of coffee) could increase energy expenditure up to 150 calories per day.[17]


Other research has documented that caffeine may help suppress appetite.[18]


Remember, losing weight and reducing body fat is primarily a function of energy balance (calories in vs calories out).

How Much Caffeine Is Safe?

The Food and Drug Administration (FDA) recommends a maximum intake of 400 mg a day. Research studies have shown that consuming caffeine in amounts up to 6mg caffeine per kilogram of body weight per day is safe.


Furthermore, the research to date concludes that caffeine delivers its ergogenic properties when dosed between 3-6mg/kg.


In terms of real-world numbers, 3-6mg/kg of body weight would mean that a 180 pound person could use between 245-490mg caffeine.


It goes without saying that if you are caffeine-sensitive or inexperienced with caffeine (or stimulants in general), you should start off with a small amount of caffeine (50-100mg) and see how you respond.

When Should I Take Caffeine?

Research notes that caffeine can take as little as 20 minutes to reach the bloodstream and around one hour to reach full effectiveness.[23] What this means, is that if you are planning to use caffeine to boost your exercise performance, you may want to take your pre workout supplement at least 30 minutes prior to starting your workout, to give the caffeine the chance to reach peak levels and deliver its full ergogenic payload.


Caffeine also has a half-life of 5-6 hours, which means it stays in your system a decent amount of time. Therefore, if you are particularly sensitive to the wakefulness-promoting properties of caffeine, and training late at night, you may want to avoid caffeine-based pre workouts and opt for a stimulant-free pump pre workout, such as Mega Pre.

Caffeine is an incredibly popular stimulant and is widely available in both whole foods and supplements. It’s been extensively researched and shown to be effective for boosting performance, and, more importantly, safe when dosed properly.