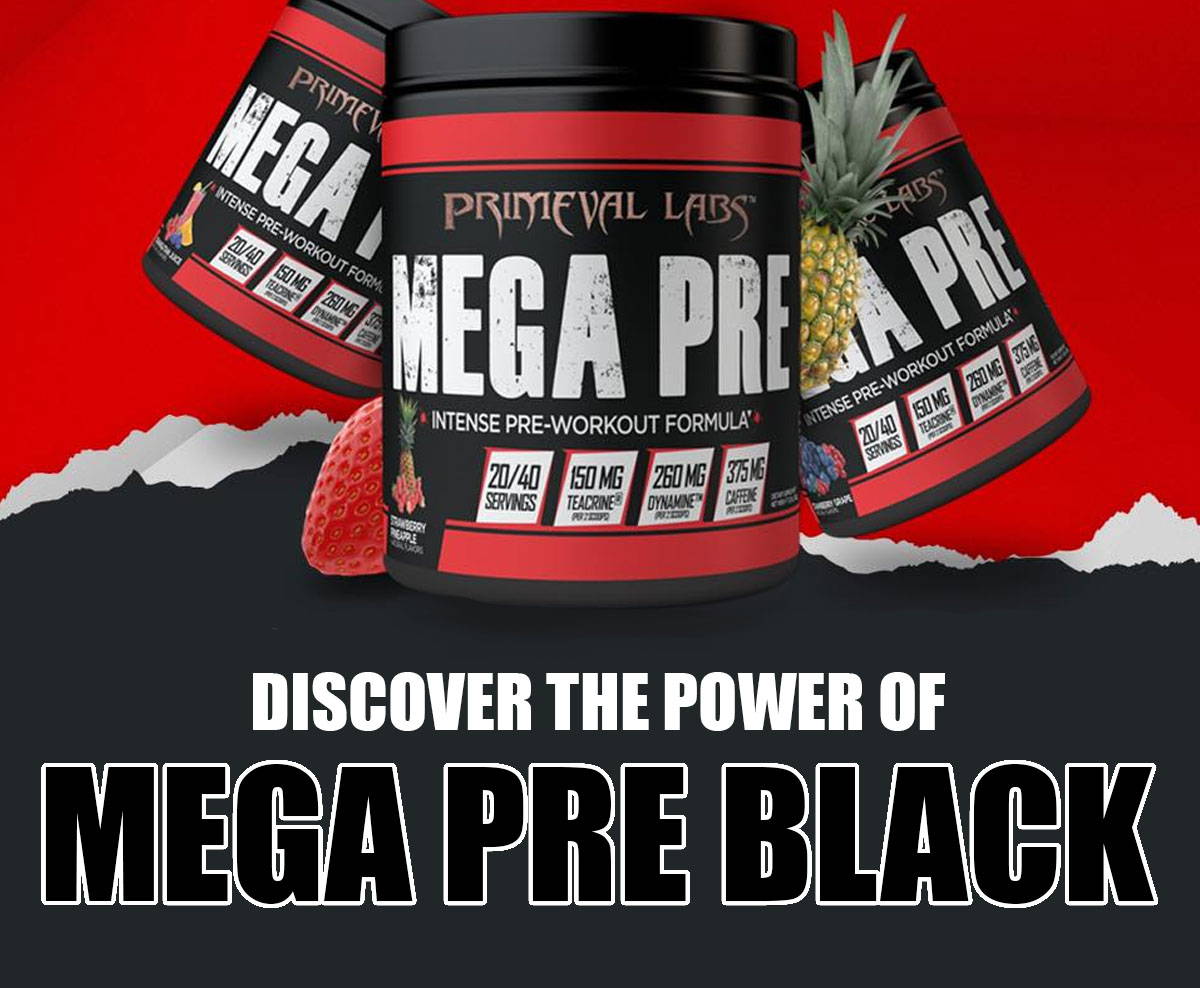 THE MOST ELITE PREWORKOUT AVAILABLE FROM PRIMEVAL LABS

Mega Pre was fueled by a robust combination of vasodilators, vasorelaxants, energy enhancers and focus boosters to create a pre workout that powered thousands to their best workouts ever, but still, you clamored for more.*

Liquid error: product form must be given a product

BUY ONE GET ONE FREE 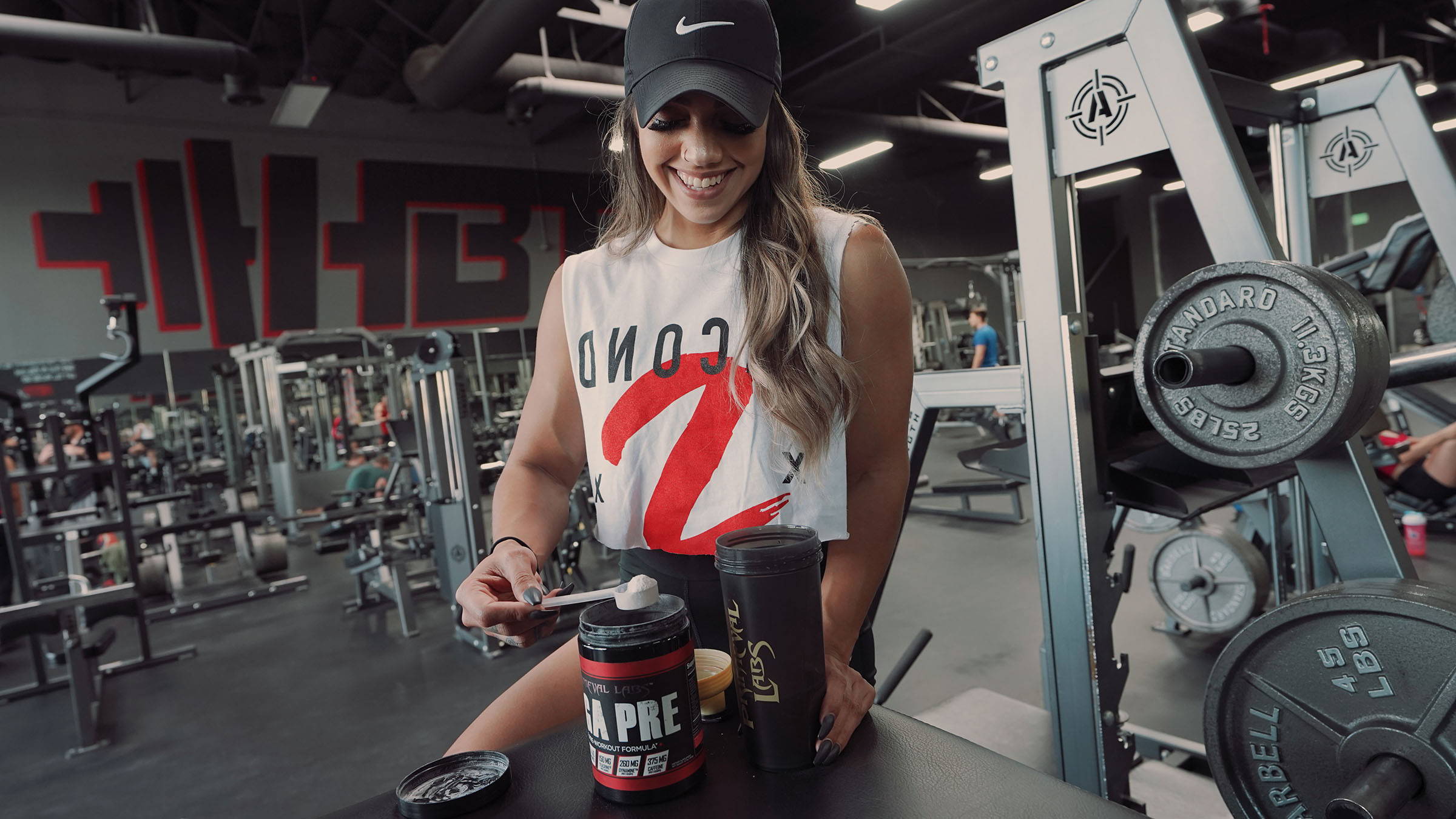 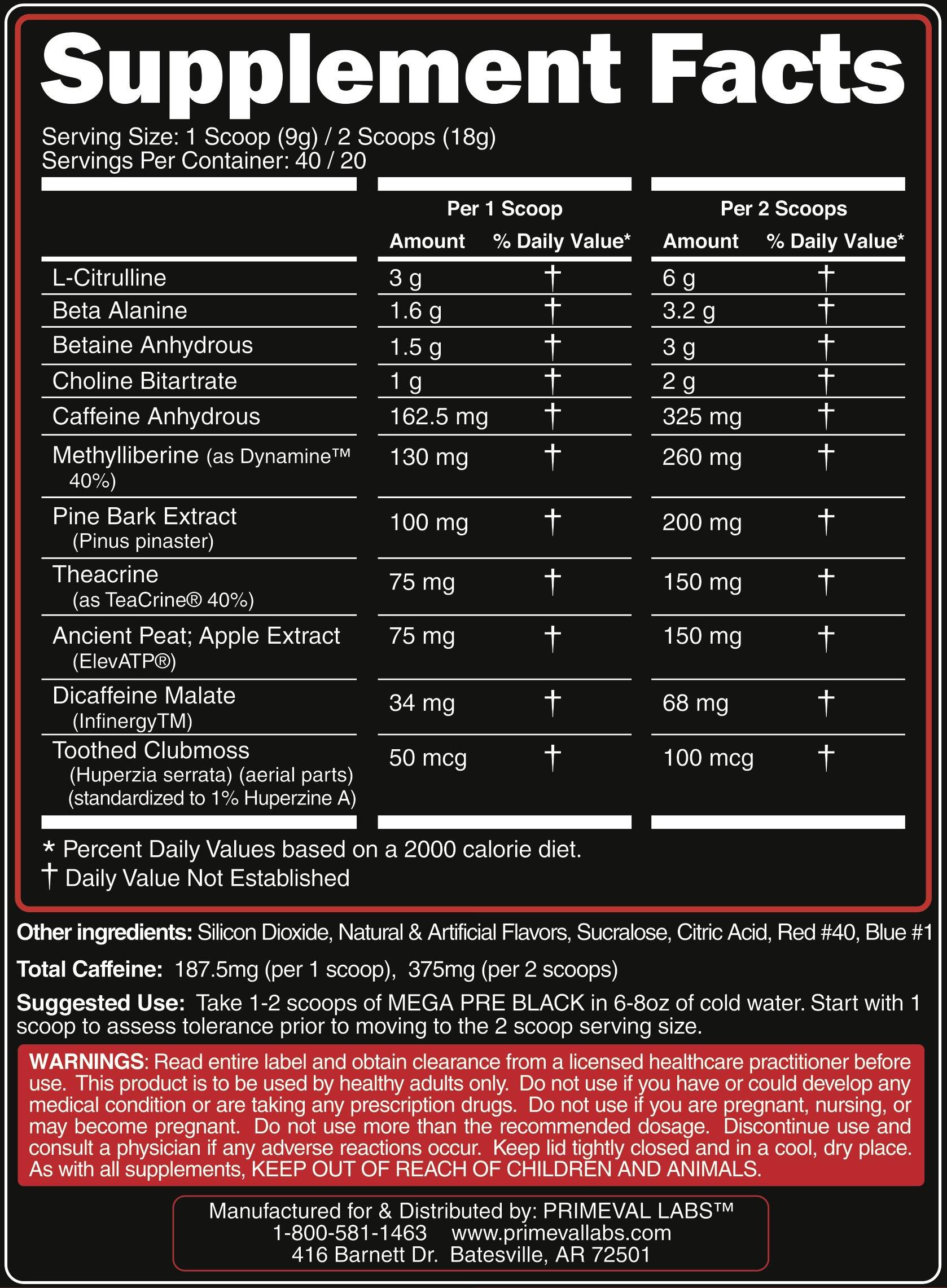 What is Mega Pre Black?

Mega Pre Black takes the best elements from the original stimulant-free Mega Pre and adds several additional energy and performance enhancers (including 260mg of 40% Dynamine!)  to create a pre workout experience unlike any other.*

With Mega Pre Black, you get all of the same great pumps and performance of the original Mega Pre, but now you get all the energy to match those epics pumps!*

You asked for the best, and Primeval Labs has delivered the best pre workout in Mega Pre Black!*

L-Citrulline is a nonessential amino that supports nitric oxide production by increasing plasma levels of L-Arginine, the amino acid that serves as the substrate (“fuel”) for nitric oxide production.*  The reason Mega Pre Black doesn’t include arginine is that L-arginine has terrible bioavailability (meaning our bodies don’t use it efficiently).* Provided a large enough dose of arginine is ingested (10-20g) research notes it can bring on a lot of unwanted GI distress.[1]*

L-Citrulline, on the other hand, offers a high degree of bioavailability, [3] and it’s easy on the GI system. [2] Furthermore, Citrulline has also been shown to be a better supplement for increasing plasma arginine levels than even L-arginine!* In the end, L-Citrulline is a better option for those looking to boost nitric oxide production.*

With greater NO production comes greater blood flow along with additional oxygen and nutrient delivery to your muscles, supplying them with the necessary nutrients to perform optimally.*

Beta alanine is a powerful little amino acid that helps increase stamina and endurance by increasing muscle concentrations of carnosine. [8,9,10,11,12]*  Carnosine is a powerful intracellular buffer that helps eliminate acidic ions that accumulate during the course of repeated muscle contractions.

These acidic ions contribute to the “burning” sensation you feel during training, which induces feelings of fatigue.* But, this acidic ion build up also inhibits a muscle’s ability to repeatedly contract. Eventually, too many of these ions accumulate, and muscles will no longer contract.*

By increasing intramuscular concentrations of carnosine (via beta alanine supplementation), muscles’ ability to buffer these acidic ions is enhanced, allowing for more work to be completed before fatigue sets in.*

Betaine (trimethylglycine) is a compound that’s found in beets and other plants.*

Over the past few years, betaine has received increased interest among athletes due to the results of several studies (conducted in humans) which note betaine supplementation may boost muscle endurance and increase strength.*

Choline is an essential nutrient that plays a number of roles in the body as a methyl group donor as well as a necessary component for the synthesis of cell membranes. [15,16]*

As the name implies, acetylcholine is heaving involved in learning, and it’s also involved in memory, cognition, and muscular contractions. *

Therefore, if you don’t want to feel tired, or want to avoid the onset of fatigue it makes sense you would want to stop adenosine from exerting its effects in the body.*  That’s the beauty of caffeine.*

It is structurally similar to adenosine and competitively inhibits the adenosine receptor, meaning adenosine can’t bind to its receptor.* This is why when you ingest caffeine, you feel more upbeat, alert, and energetic.* But caffeine’s benefits extend beyond increased feelings of energy and motivation.*

Mega Pre Black was formulated to deliver extreme energy along with extreme performance.*  No compound has been more synonymous with intense energy and focus as of late, quite like Dynamine.*

Dynamine is the “faster acting” cousin of TeaCrine, another well-known energy boosting agent featured in Mega Pre Black.* Dynamine is described as a neuro-activating compound that ramps up energy and focus without affecting blood pressure or heart rate. In other words, Dynamine™ can stimulate the CNS, without affecting the cardiovascular system.*

Additionally, unlike many other stimulants which cause vasoconstriction, Dynamine does not impact blood flow at all, and, similar to TeaCrine, does NOT cause tolerance build up.* That means that you can keep getting the same powerful boost in energy and focus without having to continually up the dose.*

Also, Dynamine exerts less of an impact on your adrenal glands than caffeine or other stimulants, which helps reduce increases in cortisol, a common problem with other pre workout stimulants.*

Pine bark extract is a supplemental source of powerful antioxidants known as oligomeric proanthocyanidins, which may have possible cardiovascular benefits.[22,23]*

Research notes that the proanthocyanidins contained in pine bark extract may combat vasoconstriction caused by epinephrine and norepinephrine via increasing the activity of endothelial nitric oxide synthase (eNOS). [24,25]* eNOS is the enzyme that catalyzes the production of nitric oxide.*

Pine bark extract has also been reported to decrease blood concentrations of endothelin, an endothelial-derived vasoconstrictor.[25,26]*

TeaCrine® (1,3,7,9-tetramethyluric acid) is a purine alkaloid that is structurally similar to caffeine and found in Kucha tea, Cupuacu, and Coffea robusta.* Since it is structurally similar to caffeine, TeaCrine operates in many of the same ways caffeine does -- adenosine antagonism and dopamine release.* There are a few notable differences, however, between caffeine and TeaCrine.*

For starters, caffeine hits harder and faster than TeaCrine*. But, TeaCrine’s effects are longer-lasting, and smoother-feeling.* By combining the two, you get the best of both worlds (fast, hard-hitting energy coupled with long-lasting, sustained energy).*

Moreover, TeaCrine does not come with habituation or tolerance build up that caffeine does. And, TeaCrine also doesn’t impact cardiovascular functions or sleep in the way that caffeine can.* Interestingly, several studies have been conducted combining caffeine and TeaCrine and found that the combo may [27,28,29,30]:*

elevATP® is one of the newest muscle building ingredients lighting up the supplement scene recently. Created from a patented combination of ancient peat and apple extracts, elevATP has been shown in human research trials to significantly enhance ATP production in the body! [31,32,33]*

As we all know, ATP is the cellular “currency” our muscles use to produce energy. Once you’ve used up all of your ATP, your performance falls off a cliff.* For years, supplement researchers have sought out various forms of oral ATP to improve systemic levels of the performance-driving compound, but time and again their efforts were thwarted due to poor ingredient bioavailability.* Essentially, the compounds that showed promise in cell culture did next to nothing when you actually ingested them.*

Enter FutureCeuticals and the arrival of elevATP.

elevATP supplementation has been shown to enhance ATP production[ 31]. What’s more, it may also improve muscle pumps, too!* ATP (and its derivative adenosine) can induce vasodilation following release from the red blood cells via the production of nitric oxide.* But it doesn’t stop there!

More recent studies investigating the effects of elevATP on exercise performance note that it may significantly increase strength, power, and performance in resistance-trained men. [34,35]*

Supplementation with 150mg elevATP® (the same dose included in Mega Pre Black) also enhanced hypertrophy and prevented a decline in performance that sometimes occurs as a result of increased training volume and overreaching. *

In other words, elevATP may help prevent signs of overtraining.*

Mega Pre Black catapults you off the starting line with a robust 325mg of fast-acting caffeine anhydrous. Most pre workouts would stop there, but we wanted to deliver the best pre workout energy experience possible, and because of that, we’ve included an additional 68mg of Infinergy dicaffeine malate.*

This slow-releasing form of caffeine provides a sustained release of energy that helps avoid any crash typically experienced with other high-stimulant pre workouts, and ensure you have ample energy to finish your workout and still get work done afterwards.*

Huperzine A is a powerful nootropic that complements choline-boosting properties of choline bitartrate.* How do the two ingredients complement each other?

Choline bitartrate helps directly support acetylcholine production by increasing levels of choline in the body. Huperzine A indirectly enhances acetylcholine levels by inhibiting acetylcholinesterase -- the enzyme that breaks down acetylcholine.[39]*

Huperzine may also serve as a neuroprotectant, as there is data indicating it may help protect neurons from glutamate (the neuron death molecule).[40] Some other evidence suggests it may even help stimulate growth of new brain cells (neurogenesis). [41]*

Shop ALL Of Our Pre-Workout Options: